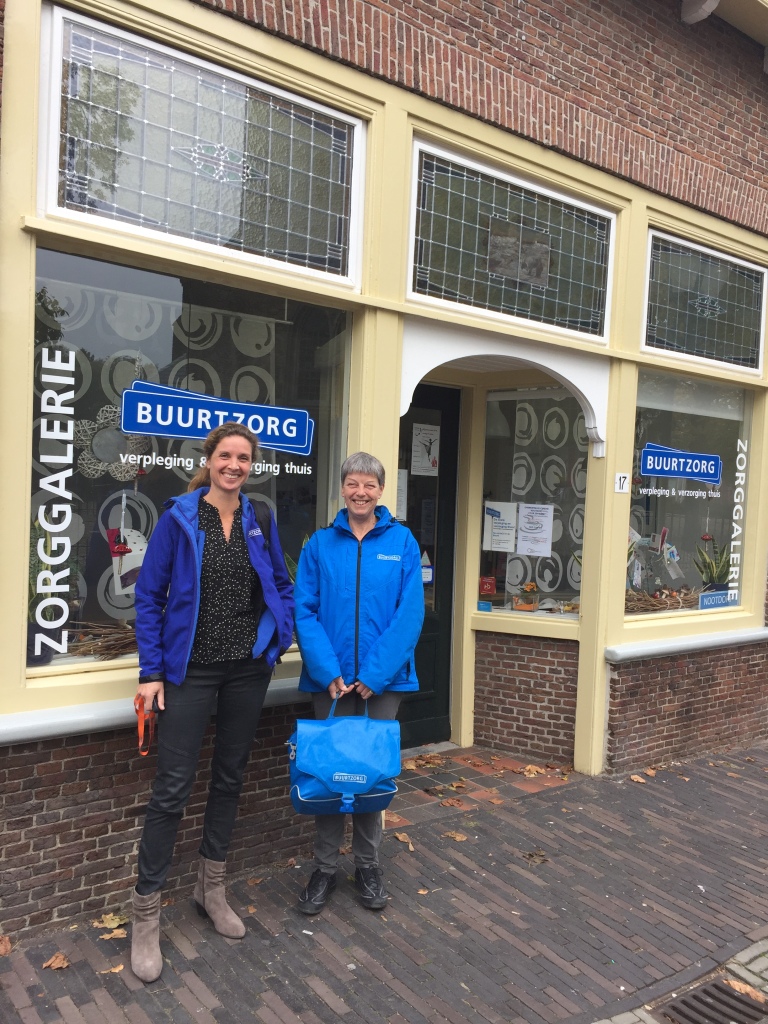 I spent yesterday with Madelon and Lies, two nurses working for (with?) Buurtzorg. This is a Dutch home-care organisation that is hoping to spread internationally in coming years.

I’ll start by explaining for those of you who haven’t heard about Buurtzorg – what it is and, where it came from.

Buurtzorg means ‘community care’ – it was started in 2007 by Jos de Blok, a Dutch nurse who at the time was frustrated by the fragmentation and depersonalisation of care. There were various reasons for this situation – a drive for consistency and likely, cost-control through engagement with big business and a limited number of big care providers.

Jos and colleagues set-up small – that is ten to 12 people self-managing teams providing local, community care to mostly older people – focusing on wellbeing and independence – it is these elements – self-managing teams and the maintenance of wellbeing which are at the core of the Buurtzorg success.

Buurtzorg has demonstrated improved quality, care and outcomes, reduced hospital admission and length of stay, and, reduced long-term costs of care, all through focusing primarily on keeping those people who are well as healthy and independent as possible, concentrating on ability rather than disability, wellbeing rather than disease.

I can’t go into the minutiae of the business, as, I am no expert; what I know I have learned predominantly from Laloux’s book and the part of my masters course which Jos supported.

What I have found so very interesting, beyond the self-managing teams – which are, in essence the conceptions that:

I appreciate for some, those of you on the right of the fence, this will go against what you believe – but, it works and it is, likely, to be part of the salvation of our society.

This isn’t beating our scythes into ploughshares, more converting our managers into coaches, and, our technologically disease focused institutions into holistic health hubs.

More importantly however, seems to be the Dutch focus on wellbeing – not waiting for people to fall apart before you intervene.

In the UK, so much resource is invested in acute hospital care – a system which we all know is not working, which is not sustainable and which, in reality, for a large number of frail, older people with complex health conditions, doesn’t work.

We all know that older people often leave hospital in a worse state than they go-in; hospitalisation is all about cost and benefit – the benefits of receiving sophisticated, high-tech medicine versus the costs of loss of autonomy, identity and independence.

Sure, we want the cardiac monitor, when we are having a heart attack, but when we have fallen and have a sore ankle or back, there is little that technology can offer us, despite beliefs to the contrary, that more medicine is better.

So, the Dutch seem particularly focused on ensuring independence and socialisation and looking-out for the vulnerable in society; not waiting for them to appear on the discharge checklist of an NHS flow-manager, instead, lifting them up before they have fallen – physically and metaphorically, and keeping them going.

I know when certain people read this they will dismissive, they will interpret this as either something specific related to Dutch society that we can’t reproduce in the UK, or, likely, something more general – what we call primary prevention or population health which is so big we can’t think where to begin.

The older Dutchmen and women flying past me on their bikes as I walked to the hospital this morning seemed set on getting somewhere fast; how wonderful.

So the focus on wellbeing and around that, community;

Buurtzorg isn’t a panacea, just another way of doing things that seems more in-step with the 21st Century than many of the other ways of working that I have seen. More concerned with people than the process;

One Reply to “A bit about Buurtzorg”