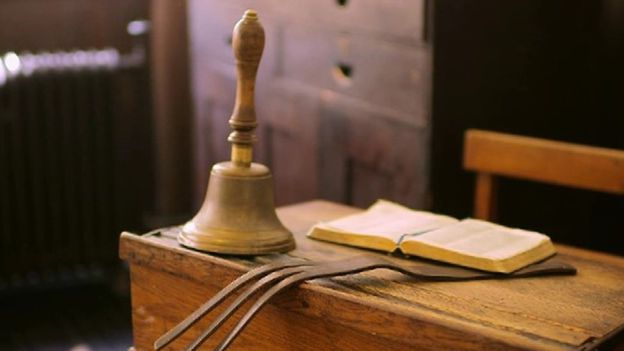 I am afraid I can’t give you an historical overview of schools and hospitals, let’s just say they are both social constructs that tend to reflect on a certain point in human development – the will to educate our children and the desire to support us when we are ill. It would be hard to conceive of a modern society without these being at the core.

Again, that is not where I am going.

It is more the reflection that if you look to the 21st Century model of these institutions, and perhaps compare them, there are some striking similarities. I won’t look at the differences in detail either, as, this isn’t an essay or something I will be graded-on for my GCSE, but, my blog and, I am neither a student nor a patient. (Mostly.)

Here are some broad similarities:

> Both are managed/governed (by and large – there are exceptions out there), along the Victorian factory/top-down model.

> They have many rules

> There is a rhythm to each place – register, assembly, lessons – drug rounds, ‘wash’, meals, ward-rounds.

> There is an end to each – you graduate, you get better or you deteriorate.

I am not saying schools are hospitals or the opposite.

And, like these aspects in common, there are areas for improvement – We, in UK are experiencing a revolution in patient experience; it started with the notion of ‘nothing about me without me,’ and has evolved into the campaign to #EndPJParalysis – the de-medicalising, de-institutionalising of healthcare. Removing the uniforms, the visiting times, even bending the rules around what patients know and decide.

In this sphere, schools have a way to go. The only choice to sitting exams is leaving school, and, as our government has made clear, if you leave school without a qualification you are on thin ice – a little like the concept of ‘discharge against medical advice’ in hospitals.

We talk of person-centred care and, in many areas this is becoming the norm. Services, hospitals built for patients, with them at the centre; the medico-centric perception is under threat. And, hurrah to that.

I have even heard of child-centred education, which my sister tells me is a thing in Scotland. As to whether it sits at the core of English schools I don’t know – as any parent will tell you, finding-out about the good and bad of curriculum from your children is not easy.

The best example I can think of, is, every summer, my son shows me his pedometer which after playing cricket registers a couple of steps, and that is his exercise. He wonders why. I wonder why. Perhaps it is because I am not English that I can’t see any good in the game. Why not have them running around the pitch 20 times before a match?!

And, with schools, in hospitals there is good and bad. We don’t hear much about abuse of kids in school. The explicit evil dealt to folk in the middle of last century seems to have faded – I imagine there is still some darkness, some covert bullying, whether of teachers or students. I won’t mention the scene in hospitals – some are fantastic – taking advantage of the strength, intelligence, cleverness and creativity of their patients and staff, others, not.

Do you learn in a hospital, do you get better in school? It is probably easier to examine the first question – sure, in some environments, patients learn about their conditions, are able to see, examine and review the behaviours of doctors, nurses and all the other members of the team. If they are astute they can discover not just about their situation, but all the other aspects of treatment and cure of those in their bay – their dietary, bowel, anxiety habits; the magical protection of hospital curtains falling down on sound-proofing.

Do children recover in school? It seems here, as with hospitals, the goal is not really to recover – you do that after discharge, during convalescence or sitting on the settee. Children seem to find school tiring, exhausting and, yes, exciting, although not as thrilling as when I was a boy. But, as with all things, we tend to remember the good and forget the bad.

Was this a reasonable comparison? Was there any value in holding both up to the light? Perhaps, perhaps not.

Let’s just say there is huge potential in relation to both systems of work, learning and treatment; it we take the best from each, the remainder is easy. Sure, there are socioeconomic, geographic and situational differences, but with our inherent ingenuity I am sure we can overcome.

One Reply to “School / Hospital”