I was struck last night by the protest outside parliament calling on JC and the Labour Party to be less Anti-Semitic; It was actually the counter-protest in support of JC that caught my eye. It was like a modern-day scene from The Life of Brian; particularly the moment on the Channel Four News when the reporter was trying to interview someone from the second group who was being heckled by a member of the first, when a lanky curly-haired youth interposed himself between the two with, ‘Let her speak! You’ve had your turn,’ and, the response, ‘No need to get violent.’

You couldn’t have scripted anything better. 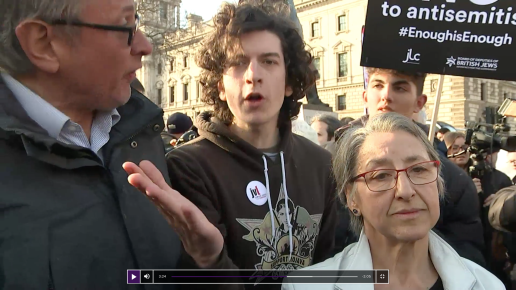 I am Jewish, or a Jew – if you consider the recent TAL Podcast. It is OK for me to say these things, although, I hope not to fall into the Self-Hating Jew thing; I don’t think that is me. Ask my kids.

I want to take us back a few years to my mum’s funeral.

And remember, this is not self-loathing; it is what happened.

When my family and I started-out, back in the day – I guess, around the turn of last century, we belonged to the tribe of Orthodox Jewry. This meant keeping Kosher, not driving in the car on Saturday, fasting when relevant. That sort of thing. Heck, when I was little I even wore Tzitzit – a word I haven’t ever written in my life.

With the passage of time, memories of Langside Synagogue in Glasgow – musty old men, hard wooden benches and New Year’s Eve, our family moved, around the place, with my parents finally settling in a retirement complex in the South Side of Glasgow. All was well;

When younger, on Saturdays my mum would endeavour to drag me to prayers at the local Shul. Often, I would accompany her. Funnily, although this was to the Big Synagogue in Giffnock, we were never members i.e. my family never had special seats they could call their own, nomadically we would sit in a vacant spot, although I don’t ever recall my dad attending, my grandfather would sit with his brothers, who, in themselves were paid-up. We weren’t being schnorers – it was just, that we opted to pay for seats in the old place, and not being wealthy enough, couldn’t afford double-membership.

I wonder if this was a contributing factor.

In the latter years, my parents drifted away from the Orthodox community, who with time had slipped more into a more extremist camp – a little like many of these things; folk with Sheitels and big black hats began taking over.

They joined the Reform Synagogue – cue, men and women sitting together, a tolerance for intermarriage, driving on the Sabbath.

Heck, with the arrival of Rabbi Nancy everything changed. A woman. Oy gevalt!

My dad died uneventfully; the Orthodox rabbi came and officiated over the ceremony.

With my mum, the Orthodox folk, guardians of the cemetery deemed it inappropriate that a woman should officiate at a funeral. Nancy wasn’t allowed access.

This was a big thing for me and my family.

Just at the time when you least want factions, silly rules or regulations, there, in the middle of the mourning, some bastard was quoting the book. (Those of you who know me today, perhaps have a sense of why I get so upset about silly hospital rules…)

In the end, my siblings and I ran the ceremony; Nigel leading proceedings.

That was my memory last night as I saw the woman trying to put-across her view of Corbyn; the guy, heckled by police as he protested Apartheid back in the 80s. 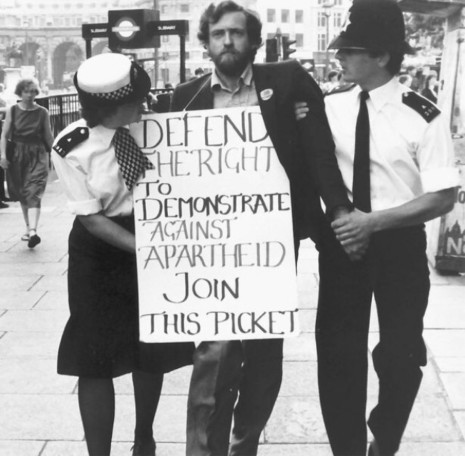 I re-tweeted a film of Corbyn shaking the hand of a Rabbi from some time ago. Before all of this.

Recently, there has been a morass of Anti-Zionism amalgamated with Anti-Israel and Anti-Semitism; lots of opposition. I usually prefer to define myself by what I am rather than what I am not. Standing-up for the rights of Palestinians very often slips down one of these pathways; criticising Netanyahu another.

Some people say that the anti-JC protest was actually anti-Labour (note, the small ‘a’s) because of some Jewish names being associated with the Leave Campaign. This is the same racist bullshit that got us here in the first place. (See here).

And, how come, when that mural was painted in London six years ago I never heard anything about it? Heck, had I known, I’d have headed-down with my kippa and neutral-coloured wall paint. 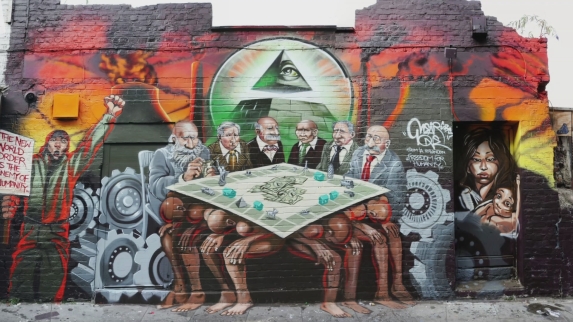 Who do you trust?

The Left or the Right. Does standing in the middle make you believable? It didn’t work for Nick Clegg. Believe in nothing and you believe in anything.

In this post-questioning, Putin loves Trump era, where we look back fondly on the Cold War, when folk thought they knew up from down, we are left in a mess. A guddle. Stramash.

I go back to that guy who was interrupting the nice lady who was being interviewed. I can imagine he would have spoken-out in favour of the ban on my mum’s female rabbi, and, what is this about?

Some of you, those familiar with this blog will no doubt have worked-out where this is heading – and, I am sorry, if I am repetitious; Person-Centred Care.

Respect for ourselves, respect for one another, seeing those around you as equal to you, listening their opinion. Deference, caring, kindness. This is my religion and political affiliation.

And, just before I end, rather than write a separate post or supply an addendum, like Jimmy Wales. I would be really grateful if you like, dislike or are indifferent to this blog to let me know what you think, or, just go for a share on Facebook or Twitter. It would make my day. Why? Well, I honestly don’t know why I write these blogs, other than they help reduce the level of noise in my head, a therapeutic form of typewriting.

5 thoughts on “There was a thing”