In the past when I have written about Mr Hunt I have struggled to use his name, generally preferring the abbreviation ‘JH’ or just that man. As if, by not naming him he is less real, more likely to be the product of a too-vivid nightmare. But, alas, he is real. This leads me to the thought behind this – as he is real, he does exist – he isn’t some terrible propaganda item thought-up by the right-wing press to distract us from the real problems, it must therefore be the case that being him must be a… thing.

I can’t not reference the movie with Cameron Diaz, John Cusack and… Mr Malkovich.

There is a significant distinction between the character and the person, just as there must be with… Oh. I can’t keep it up; I’ll revert to JH. Yes, JH. He is the guy with the government position and he is also the guy, the putz who presumably struggles to ensure his socks are not inside-out in the morning. You can’t deny a fellow human-being their humanity, no matter how much you disagree with their actions – be they saint or sinner.

So, JH exists. He is a real person. He was once a baby (I’ll stop it with the Hitler allusions in a minute :-))(That’s for another day when I am picking on Mr T.) – and, there must be a notion behind his actions that translate into some sort of ‘good’ – admittedly his good appears to be at variance with that of the entire profession of nurses, doctors, therapists and so on who are employed in the organisation labelled NHS, yet, it must mean something to him. It must hit certain neurones regardless of the twisted manner in which they fire.

I got on to this subject today through the random-thought process linking the snow falling (yes 2.4.18), lying on the grass. This took me to thinking about the impact this will likely have on the hospital – perhaps either compounding or alleviating the bank-holiday effects and the notion of the grass being greener; when I was working in Doncaster, I perceived the grass being greener in other places, now I am in other places, the grass isn’t necessarily greener, just different.

So, I don’t believe many can justify arguing that JH is absolutely bad. There must be some relativism.

What, therefore has improved in healthcare in the past five years?

Yes, I struggle to find an answer.

We talk about staff pressures being greater than at any time, this allayed with patient experience being worse (think back to the old lady in A&E) – yet, it is a reality that fewer patients fall in hospital, there are less cases of C. difficile and MRSA bacteraemia than there were five or ten years ago. PJ Paralysis. What else… Our workforce has become more agile, less hierarchical and more diverse – five years ago I would look frustrated at an x-ray and wonder why the radiographer couldn’t tell me whether the bone was or was not broken (the old way was to signal the possibility with a red-dot) > nowadays, radiographers are routinely reporting x-rays, something many have been doing, only, in their own heads for decades.

The mishmash of prescribers, treaters, diagnosticians – is this the result or a by-product of the Tories screwing with the health service?

In many ways, you can compare the government since Brown’s departure as reflecting the Global Economic Crisis (do we still call it that?) since 2007 – sure, it has led to untold levels of suffering and unhappiness, yet it has also created efficiencies, possibly slowed global warming and diminished the amount of waste in society (i.e. we recycle more) – perhaps you need to consult an economist to untangle all of that.

What this is saying, a little like Candide – should we interpret the world optimistically, through a rose-tinted lens considering that everything that happens, does so for the best possible reason?

From JH to Voltaire – not an easy transition.

Yet, no matter how much I try to stay away, divert myself, I return to the reality.

Whether our Secretary of State for Health is a madman, a fundamentalist or a puppet of the powerful, perhaps one day we will find-out the truth. ?JH’s autobiography ‘Why I did what I did.’

Yet, we are left with the reality of our situation.

And, do I really believe that things are that much better or worse?

My heart, my soul says, yes, things are worse, yet, my logical mind views society on a grander scale and realises that no one seems to have all the answers, each person’s interpretation of the way is just that – (think Picasso & Cubism) – there is no absolute right.

And, Mr JH is human; What would you do in his situation? Resign? Leave the country? Change your politics or religion?

It is handy to have someone to blame for everything. This is what Hitler did in the 1930’s and, Trump is doing now. Scapegoat the weakest in society and you are sitting pretty.

What do I want?

I guess, in essence, for things to work.

Low incidences of harm or error.

Is this too much to ask?

How much does the government influence any of the above?

Well, here is a narrative >

Many nurses aren’t having much fun at work, this is because they are unable to provide person-centred care, this leads to more harm, poorer quality treatment, prolonged length of stay (and readmission) and staff, patients and carers losing-out on care, dignity and respect.

Why are nurses not having fun?

The biggest pressure (at least from what I see) is the challenge to care for vulnerable, often dependent people with inadequate staffing numbers. One nurse caring for 10 patients instead of five. That sort of thing. We wouldn’t expect to fly across the Atlantic if the plane was only 50% staffed, yet, we run the NHS similarly.

Why the staffing problems? Well, this I have alluded to previously; people retiring early because their work conditions have become so adverse they long to leave, fewer nurses, doctors and therapists joining the ranks because of the negative consequence of training (huge debt) and beyond that, a brain-drain to sunnier places (Oz, NZ). Because of the need for fun (which can be interpreted as meaning), people seek this in other places – if work doesn’t fulfil me, I will be a part-time doctor and the rest of the time ride my mountain bike or knit, whatever.

So, going back to JH and his government. Are they helping or hindering?

We are living longer, so, they don’t appear to be having a negative effect on our longevity; yes, they are accelerating the gap between rich and poor, although that is likely a phenomenon of living in the 21st Century. *Perhaps Jacinda will sort New Zealand…

What can they do? What should they do? Are they as impotent at the rest of us?

Are we happier now than five or ten years ago? What is happiness? Is it laughter or meaning?

So much of what we know, understand, is distorted by the lens of the media – what they choose to focus upon; when was the last time anyone mentioned food-banks on the news? Yet, they are still a thing:

Is the outcome of this narrative that I don’t know and can’t know; that determining the good/bad/ugly of JH is impossible? ‘The Ineffable JH’ – maybe the title of a murder-mystery-farce? Are we all Agnostics – un-knowers? We can have our opinions, but they are as limited as… well, chewing gum. Ironing underwear? Talking about the weather.

I am still stuck referring to JH.

I have a problem with the guy.

There is no doubt a psychological rationale for this.

The American horror writer HP Lovecraft wrote about Cthulu – Judaism says JHWY – there is a precedent for not naming or speaking out-loud that which you fear.

(Is this the first time JH has been compared to a giant octopus/dragon/humanoid-beast with feelers streaming out of his head?)

Maybe this is my issue, my problem.

I shouldn’t be so Old Testament about him/her/it.

Let’s face reality – JH doesn’t influence my ability to smile and talk empathically with the next vulnerable patient to come under my care, to hold their hand, listen to their worries and search for a solution to their problem. He doesn’t influence whether I treat my colleagues with humour, dignity and respect; he certainly doesn’t have the power to control my thoughts or actions. He may be beyond description, but, he is just a guy, susceptible to the same frailties, shortcomings and mortality as the rest of us. 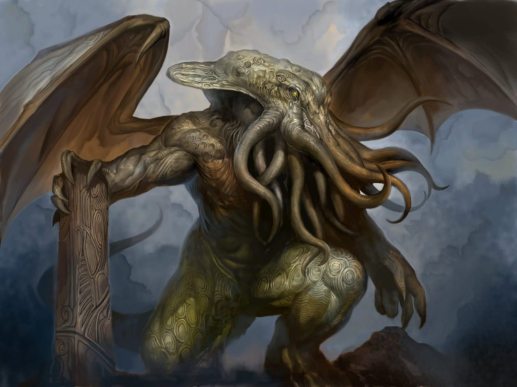