Here it is, the reveal; I can’t wait any longer. My plan had been to write about lonely old men – that I am afraid will have to wait for another time. I have a busy Sunday ahead.

This all began several months ago.

My friend Debbie sent me a link to the website for, Camerados.

Founded by Maff Potts, the idea is to support people to connect with others.

Essentially, Maff determined that one of the greatest ills in society today is our lack of connection one to another.

Sure, this connection exists in many places, but, often, our differences are emphasised, not what brings us together.

On Friday I was seeing a patient; and old lady. I said to the nurse, ‘Look, Mavis (not real name) has flowers, did a relative bring them in?’

Actually, Mavis hadn’t had any visitors or relatives; one of the patients who had gone home earlier in the day had given them to her.

This is the Camerados ethos I believe.

Last year one of the patients who was waiting for tests or investigation results popped down to the flower shop at the entrance of the hospital and bought all the other women in her bay a single red rose for Valentine’s day.

Again, that is it.

If it bleeds it leads is more their style; the more salacious the better.

People demonstrating humanity is well, not the stuff of headlines.

And here the tepee;

Before going-on, you will have to forgive another digression… tepee; what is it?

Well, when I was a little boy running around wild in the Scottish summer holidays (sigh, oy), one year my mum made me a wigwam; she got hold of some poles – broom handles I suspect and draped round these a carefully sewn sheet. I can’t remember the design, although it is unlikely to have been bought specially; more likely a remnant from Ivor’s shop.

That was a wigwam – a small Native American (‘Indian’ back then) tent, used to pass the night while on manoeuvres, perhaps tracking a runaway elk.

The larger version, a tepee was used back in the day as a semi-permanent dwelling; in the village the tepee, out in the prairie, the wigwam kind of thing.

No one seems to have agreed on the correct spelling; something that causes me no end of angst, and, I am sure, my brother Nigel, were he involved would be almost peri-seizure. For convenience I am mostly writing tepee, although sometimes I slip into teepee. Apologies.

The tepee idea, as part of a project called ‘human hospitals’ is to create a separate environment; a retreat. A little like me crawling inside my wigwam back in the 70’s, although with a door you can walk through and comfortable seats to chill; even the odd pouf.

In Blackpool where Maff and team installed the first tepee in the UK (?the world), during the three months of its installation 15,000 people visited.

Half of them were staff.

As I have described before, being a patient or working in a hospital is tough.

The tepee is a step towards the solution.

My answer is a person-centred organisation; although large scale change is harder to influence that finding somewhere to erect a 10-foot tepee. Admittedly this won’t be for everyone, some hospitals have ceilings that are too low.

Yesterday the tepee went up.

I took my family to visit.

We spent half an hour relaxing and chatting to two members of staff; the night security.

The guys described their experiences of helping patients and staff, supporting people experiencing alcohol detox – and, revealing an incredible insight into the condition, better probably than many clinical staff I have encountered. They talked about delirious patients recovering from surgery and of course older people with dementia.

They showed their humanity, their empathy, something I suspect would not have been revealed had we not been together in the tepee.

I have to confess that I didn’t reveal that I was one of the doctors; I doubt they would have told me about the occasional search for a missing schlaffing doctor had they realised I was one of them.

Here to the tepee! 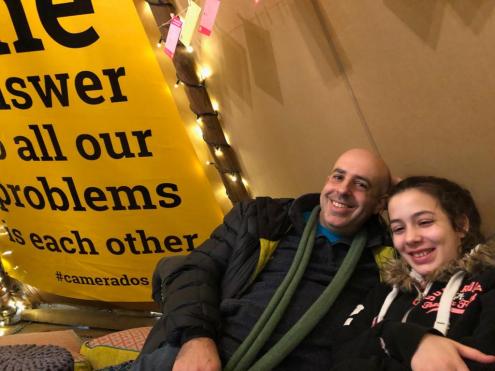 PS Tzipi was the name of one my maths teachers; I can’t get her name out of my head since thinking tepees; she had bobbed straight hair, quite harsh makeup and an at times grating voice. Her favourite descriptor for me was ‘atzlan’ – Google it if you want to find out the meaning.

PPS Camerados – taken from the Walt Whitman poem, Song of the Open Road, describes an ally, a buddy, someone to be with you as you trundle down the lonely road. I am sure a dog would fit the bill, although the connections and learning are inevitably deeper with another person.