I have just finished reading Yuval Noah Harari’s mini-book, Money; published by Vintage and at only £3.50 I think it is a bargain.

No. it’s not about the cost of the book or the price of things, it is excerpts for YNH’s other two bigger books Sapiens and Homo Deus.

Those who know me know that I am no economist.

Sure, I am interested (a previous fan of Freakinomics), but, understanding the ins and outs of economies, finance and so on is beyond my ken.

The Global Financial Crisis was something about people defaulting on loans and bank bail-outs.

Now, some of you reading this will already understand what the bank bail-outs were; why and what.

To be honest, I never got it.

There is that scene in Mary Poppins where there is a run on the father’s bank; it was only after reading Money that I grasped what was going-on; I mean, so what if everyone wants to take their money out of the bank – it’s theirs is it not?

Here is the example that YNH gave which I will change a little by using my own characters;

Roger Clydesdale is a bank owner.

Bob Moriarty is a builder.

Hannah Bun is a chef.

Moriarty has been working hard and he earns £1 Million Pounds.

He deposits this in Clydesdale’s bank.

Clydesdale now has £1 million in his bank, all of which belongs to Moriarty.

Hannah Bun decides that she would like to open a restaurant in Clydesdale and Moriarty’s town; let’s call it, Sunnyvale.

Hannah Bun needs someone to build the restaurant – she doesn’t have enough cash, and, Moriarty the builder has offered to build this for her for £1 million.

Bun decides to ask Clydesdale for a loan of £1 million.

Clydesdale agrees that Sunnyvale needs a restaurant and approves the loan. The £1 million in the bank goes into Hannah’s account, who then transfers it to Moriarty’s.

Moriarty has £2 Million in his account; Clydesdale still only has £1 Million in the vault and Bun is hoping for a nice new restaurant.

Six-months into the project, the construction has encountered unexpected delays – asbestos; an unusually cold winter – frozen pipes, this sort of thing.

Moriarty realises that to complete the job he will need another £1 Million.

Bun decides that rather than go bankrupt and not have a restaurant, she will ask Clydesdale to loan her some more money.

Clydesdale sees that if he says no, he will have a problem as Bun won’t be able to repay the money and Moriarty will be unhappy as the £2 million, he thinks he has is only £1 Million. So, Clydesdale agrees the loan and gives Bun another million, which she passes to Moriarty.

Moriarty now has £3 million in the bank (or so he thinks, give or take what it has cost him already to live and do the work), Clydesdale still only has £1 million in the vault and Bun has a half-built restaurant.

This can go on, Yuval informs us up to ten times, so that Moriarty can have a theoretical £10 million in his account when Clydesdale still only has Moriarty’s £1 million in the vault.

Now, it is likely during this time Clydesdale will have been speculating, trying to find ways to make Rodger’s money bigger – investing in all sorts of other ventures that he hopes will pay a better return. (Home mortgages are always a sound investment).

It all goes pear-shaped when either Moriarty wants all his money – this I think is a ‘run on the bank’ or Bun decides she can’t cope with such debts and runs away, that is, ‘defaults on the loan’. 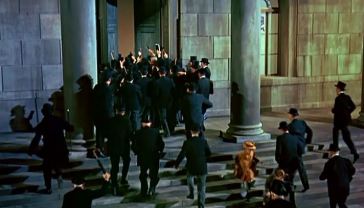 Now Moriarty wants his money and he hasn’t done anything wrong, other than perhaps charge a lot for a restaurant that is only worth £500,000, but again, that is another story.

Unless something gives it will be a horrible mess.

Clydesdale will be broke, Moriarty will be broke (he has also probably done other theoretical things with his pot of money) and Hannah, well, she might have skipped the country.

The bank bail-out was the government stepping-in and giving Clydesdale the £10 million that he owed to Moriarty, this money of course belonging to the citizens of Sunnyvale.

I guess, this is why economists, hedge fund managers, bankers and others get to earn so much money – it is a very complicated business that not everyone can understand and, when you add artificial intelligence to the mix, that is, computers working out clever ways to dice and parse the money, well, heaven knows.

I hope I have fairly represented this section of a little book which is part of a bigger book.

As I say, I’m a doctor who likes to talk with people about what is wrong or right in their lives, not a money mastermind.

Any errors are mine; please don’t use the contents of this blog to invest money or decide to build a restaurant.

If you want to read my other blog about Yuval, follow this link.

Or my blog that mentions Freakinomics.

One Reply to “Money”