The world is changing all the time, I get that.

I first heard about the notion of GPs changing the way they work on Friday afternoon.

It was a bit of a comedy really; I’ll give you an outline.

I have a list of older people I am visiting at home as part of our case management programme. This is a national system where people living with Long Term Conditions (LTCs) – asthma, diabetes, stroke, cancer, dementia are offered proactive clinical assessments every four months; I usually describe this as, ‘We want to keep you well, we don’t want to wait until you need to see us.’

In these reviews the doctor, or often, depending on workforce, the nurse, nurse practitioner or other appropriately trained clinician (Consultant Geriatrician in Maltby) undertakes a review, discussing recent ups and downs, how they are coping, blood pressure, pain, loneliness; that kind of thing.

For those patients with LTC’s who are otherwise able, we invite them into the surgery for an assessment; this seems to be most people who can either find the means to attend an appointment or have someone bring them.

For others, formally classified as ‘housebound’ – a term, like ‘bedbound’ I dislike (people are bedbound mostly because there is no one available or willing to support them to get out of their bed, rather than them actually being physically glued to it), we visit at home.

It was on Friday I heard about the GP visit thing.

After knocking on the wrong door (right number, wrong street) which led to an encounter with an arthritic older woman I almost knocked over and her middle-aged son (topless in November?) I found the right house; it was across the road and along the way.

The door was answered by a sprightly man in his 80’s.

Now, in the surgery, because of workforce issues and other things, we haven’t been as robust in completing assessments as I would like; you could say, since I joined, I have made this a thing seeking-out our older folk and checking they are OK.

This man hadn’t been seen in a year or so.

I began with my usual preamble, ‘Do you know why I am here?’

He and his daughter were not only bemused that I had come to visit (he is independent, driving to the supermarket on a weekly basis, his back room was actually a mini-gym), they didn’t know that such a service existed.

They were pleased, if at first bemused.

I think they wondered whether upon my seeing how robust this older man was, I might leave; instead I stayed, and we chatted about his health.

I checked his blood pressure, heard about his arthritis, that kind of thing.

We established that he had been unwell a couple of years ago and the ‘housebound’ label had somehow been attached to his record; ironically perhaps because of this he had missed-out on this year’s flu jab.

Fortunately, I had just visited a really housebound patient beforehand to deliver her flu jab and had taken a spare out with me in case; I didn’t miss the opportunity.

It was whilst we were talking that he (the older man/patient) asked me, I think, acknowledging the irony of my presence, ‘What about this in The Mail, doctors not visiting people at home?’

My answer was of course, ‘Don’t believe everything you read.’ (Thinking to myself, ‘Damn Tory rag.’)

On Saturday I heard the news that the BMA had voted for just this.

Today I also understand NHS England are planning to listen but not accept the vote.

It is a topsy-turvy world.

For me, visiting patients at home is the essence of care.

The worst-case scenario is a disorientated (discombobulated) person in a hospital clinic, provided short shrift by a harried locum doctor.

Most people are relaxed and familiar with their GP surgery, and are able to self-represent more or less.

Sitting in a patient’s living-room or kitchen, listening to what matters to them, I feel is the essence of true clinical care; here the doctor (or nurse, therapist) is the guest, the one on the back-foot who has to rely on their training and experience to interpret symptoms and signs of disease. Here the patient needn’t be afraid someone will walk into the room or listen through a raggedy hospital curtain.

I appreciate that not all home visits are like this, not planned or coordinated.

Many are the result of an acute deterioration in the health of an older person, who, terrified of being admitted to hospital calls their GP. Many patients do not want to be admitted; they want to stay at home and recover.

I know that some GPs refuse to visit, their line being, ‘If you are too ill to get to the surgery, call an ambulance.’

Now, this is wrong and likely an abuse of the system, yet, in some areas it is endemic, whether because of staffing issues or attitudes.

Other doctors, perhaps in affluent areas force their patients who can’t catch the bus or walk to book a taxi. This is OK so long as you aren’t living below the poverty line as are many in the UK.

And, who wants to get in a taxi when you are feverish and frail, too weak to stand?

I understand the pressures on primary care are massive.

There is great variation; with some regions having twice the numbers of GPs per capita than others – often this is the situation between urban and rural areas, also between affluent and impoverished districts. The allocation has never been fair, but that is society and for all the benefits of working in leafy suburbs, the advantages of experiencing real challenge – and sense of community in less affluent areas is significant.

Home visits to inner-city areas must be tough.

A couple of months ago, in the rain, I visited a patient in central Rotherham – it took me 20 minutes to find their house on an estate; the numbering system bizarre, with rows of identical 1970 council-built terraces. It didn’t help that I had the wrong house number.

As a youth in Glasgow I was fascinated, working as a relief postman, undertaking my trips on some days to the Gorbals and their high-rise apartments and the next Pollokshields with its former Tobacco Baron mansions.

Society is a rich hodgepodge, and this is to my mind one of the privileges of being a doctor, nurse or therapists who is out in the community. Let’s face it, people tend to blur in clinics and hospital beds;

I won’t forget the man I met on Friday, or his gym or our laughter over his housebound status, ‘He’s fitter than all of us!’ his daughter laughed. 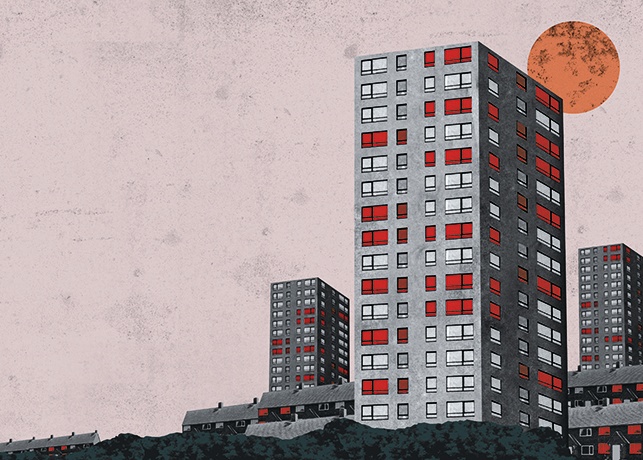 4 Replies to “GPs ending home visits – what the heck?!”