I’ll start with a doctor from a while ago.

He worked in Rutherford in New Jersey.

He is also one of America’s greatest poets.

You see, back in the day, in pastoral times, doctors spent much of their time with patients, that is, seeing, talking, developing relationships. Frequently the doctor would pop round to visit people at home, WCW would treat poorly children, he would support the dying.

The kind of the image many of us hold of a family doctor.

As to when all that changed, it is difficult to say.

Over the past thirty years, our population has become healthier – people have stopped smoking, there has been an emphasis on low-calorie diets, zero sugar drinks and so on. With this, people have been living longer (until a few years ago when the average life expectancy started to fall, in part because of deprivation related to the government’s policy of austerity and asset-stripping social care).

People have survived cancers that only 20 years ago would have killed them, keyhole surgery, biological therapy and our current experience of the Covid vaccine has saved more lives, prevented more disease than at any other time.

All of this is fantastic.

Yet, it is not all roses.

You see, and this is something I have talked about before, for all the science of medicine, the unimaginable complexity of molecular biology, immunology and biochemistry, much of what doctors do, particularly physicians and general practitioners (who make-up the majority of medical doctors) is not scientific, it is engaging, listening, communicating, it is connecting with the human being inside each of us, it has far less to do with technology and much more to do with our inner emotional and psychological needs.

For all we spend time typing on keyboards and mobile phones, engaging with Netflix and Pop-Tarts, all of this change has come-about in the past 100 years; the humans we are, the physiological creatures, influenced by hormones, passions and obsessions, our fear of snakes and the dark, our liking or disliking flavours, our biases, our unconscious minds are all still closely related to that of our hunter-gatherer ancestors of 100,000 years ago.

Take away our iPads and electric toothbrushes and we will cope, strip us of community, of relationships with others and we will wither.

It is this human aspect of medicine that is more important and likely does more good than any number of fancy medicines, investigations and treatments.

I am not dismissing MRI’s and fibreoptics, it is just, if you replaced humans with sophisticated robots, and treated our stomach ulcers and damaged cartilage, we might not have these problems, we would develop others.

When we are unwell, we have a need for assurance and reassurance, for guidance, for someone to listen.

This is what (at least to my mind) gives doctors their value.

This is why I believe it will be many years and hopefully long after I retire that robots will be able to do what I do.

And here is the thing.

You see, during Covid, only the very sickest people managed to see doctors. If they were taken to hospital or their needs passed a vetting process that led to a face-to-face doctor assessment (or, you were my patient in our care home, as I carried-on as before visiting and tending).

We all know that the majority of human communication is non-verbal.

Take away visual prompts – body language, pupil dilatation, fashion style or not and what is said is potentially distorted.

The communication is diminished. (SEE here for more!)

During the pandemic most doctor contact was done on the phone. In some instances this was conducted on Zoom or Skype, although for the most it was the phone.

It takes less (on average – some people can talk) time to talk with a person on the phone than see them face-to-face.

Doctor-patient engagement becomes transactional – ‘I did this, it was that,’ ‘OK, take this,’ kind of talk.

Indeed, I had a profound experience last week when after talking with a patient on the phone, she offered to see me in the surgery. I, thinking I was being super-helpful and kind, suggested it would be easier if I popped in to see her at home, after all, she had a bad leg.

It was only after, as I was getting into my car that she came (hobbled) after me, ‘I’d suggested I see you in the surgery as I wanted to talking about X.’ – she had been struggling to support her husband who has dementia and she found it difficult to speak in front of him.

I often miss subtleties; it is however more likely they will pass over my head on phone-calls than face-to-face.

Another example of this communication farrago was last week. Someone had the idea of conducting a face-to-face meeting. Given other commitments, I was unable to get to the desired venue, I therefore phoned-in. the meeting was therefore face-to-face for three-quarters of attendees and a few of us were online.

What happened was that the camera for the most didn’t focus on the people talking, those of us dialling-in were therefore left with disembodied communication over the less than perfect audio of VoIP – Voice over Internet Protocol; this is like the talks you have on WhatsApp. The sound quality is never as good as on the regular phone; odd things are done to the soundwaves that mean, FaceTime is OK because you can see and hear the person talking, but FT without the video is worse than a normal phone call and significantly worse than face to face. The people in the room therefore experienced full-on human communication (at its best, or worst), us on the laptops, were shut-out, maintained at a distance.

Now, what does all of this have to do with the end of medicine?

You see, my thesis is that a significant proportion of medicine is human relationship. Previously I have described it as a form of Shamanism. Just being in the same room as someone, mirroring their body language, maintaining eye-contact is itself therapeutic.

The pandemic and all the gubbins of modern medicine – the blood tests, health screening and so on I mentioned earlier has squeezed the amount of time doctors are available to doctor, to do the caring, that is the hand holding, the empathic engagements.

Over the last month GP contacts, we are told by the BBC, increased by 20 per-cent. There were 100’s of thousands more calls to GPs than before. All of this has squeezed the ability of doctors to support, to do the things that make the difference between us an robots. Relationship development can’t be squeezed, condensed or robotised. Transactions have become just that. Exchanges of information. Less silent sigh and more, ‘You said, we did.’ Which is OK if what you said was, ‘I have X, I want Y,’ but less so if you say, ‘I don’t know what I want, I don’t know what is wrong.’

Covid has pushed us towards transactions, away from relations.

And, just like the baby monkeys, if you take away the organic (even a mock-up mamma), they will fail to thrive, so too with our patients.

Three, five-minute consultations all taking people in circles, often, and this is very dependent on your individual GP (worse with the very big surgeries), you will move from doctor A, to nurse B and doctor C. Continuity of care and the associated quality of relationship is weakened and the outcome lesser.

People are forced into holding-states, like planes that circle airstrips unable to land, slowly running-out of fuel until they crash.

I don’t really have an answer.

I think if the government, that is, NHS England, allowed doctors and nurses to spend more time with people and reduced the paperwork (or click-work) demands that would improve outcomes. It isn’t necessarily investing in more doctors or nurses, it is hacking away the inessential as Bruce Lee would say.

You start with a lump of stone and you end-up with David.

That is better than a rickety construction that blows-down when the weather changes.

Has Covid damaged medicine or is our society to blame?

There is still hope – lots as there are so many people, nurses, therapists, healthcare assistants, carers, pharmacists and so on, all of whom are able to do the human-bit if on they are allowed time.

We are human, human; that is our skill, our blessing and our curse. Allow our humanity to guide us! 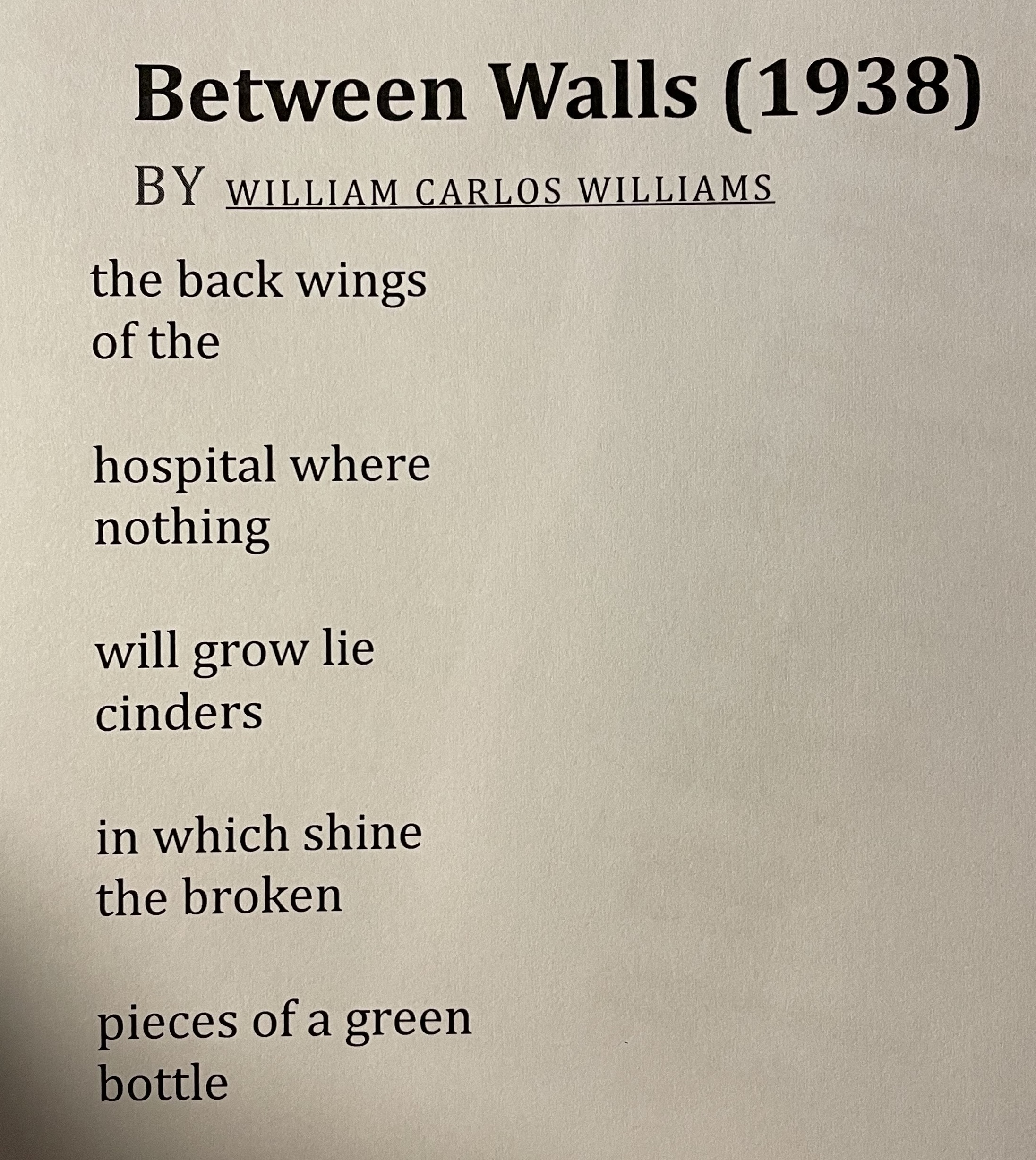