It has been a busy few weeks.

First, I became infected with Covid.

That started it all off.

It wasn’t a surprise that I caught the virus – all the signs were present, that is, increasing numbers infected, an attitude of acceptance and disavowal by everyone around, confused and mixed-messages – wear a mask here but not here or here, use alcohol gel but don’t forget to wash your hands, symptoms x, y and z are relevant but not a, b, and c.

I will perhaps discuss the symptoms I experienced another time, if you are interested, there are no end of articles and blogs describing what it is like to be infected, most from people who were much more unwell than me.

Nevertheless, the infection has passed, and I am getting-on.

Last week I was in Florence.

After some toing and froing by email with the hotel reception desk we were given rooms with views of the river, that is the Arno and that a reference to EM Forster. 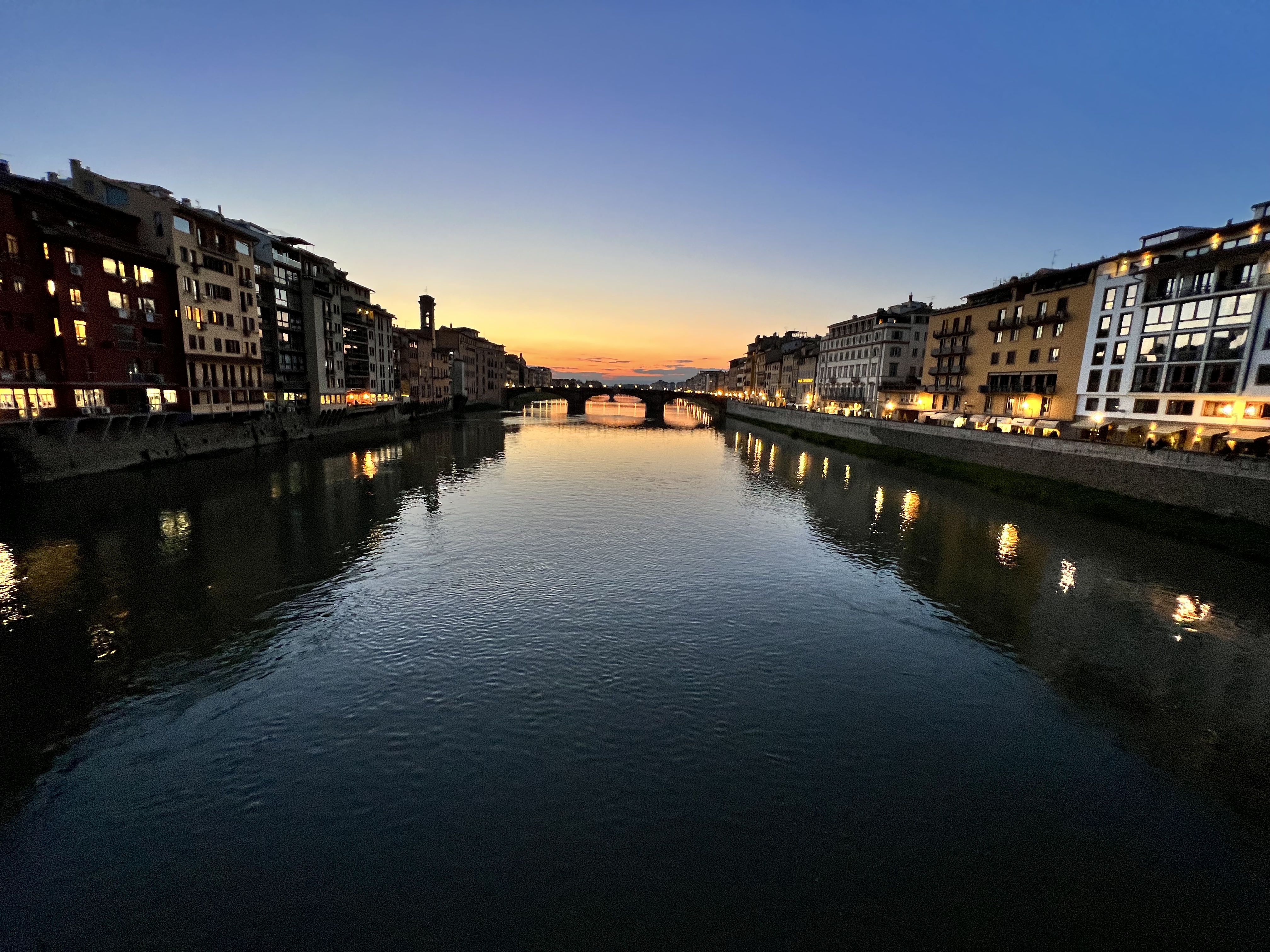 We were in the heart of the old city surrounded by cobbled streets and tourists, the same kinds of people, generations apart who have been visiting over the centuries.

We saw sculptures and paintings of the annunciation, the crucifixion, Calvary, the pieta, you name it. Jesus as an idea, as a baby and as a godman resurrected. In gold-leaf, in fresco and oil paint, all shapes, sizes, times and textures.

We learned about the various symbols of birds, flowers, feathers, and items of clothing.

It was an education.

Dante Alighieri, the poet of Florence wrote the Divine Comedy following his expulsion from the city on the 27th of January 1302. (He is buried in Ravenna; the Florentines have been trying to get his bones returned without success since 1332). 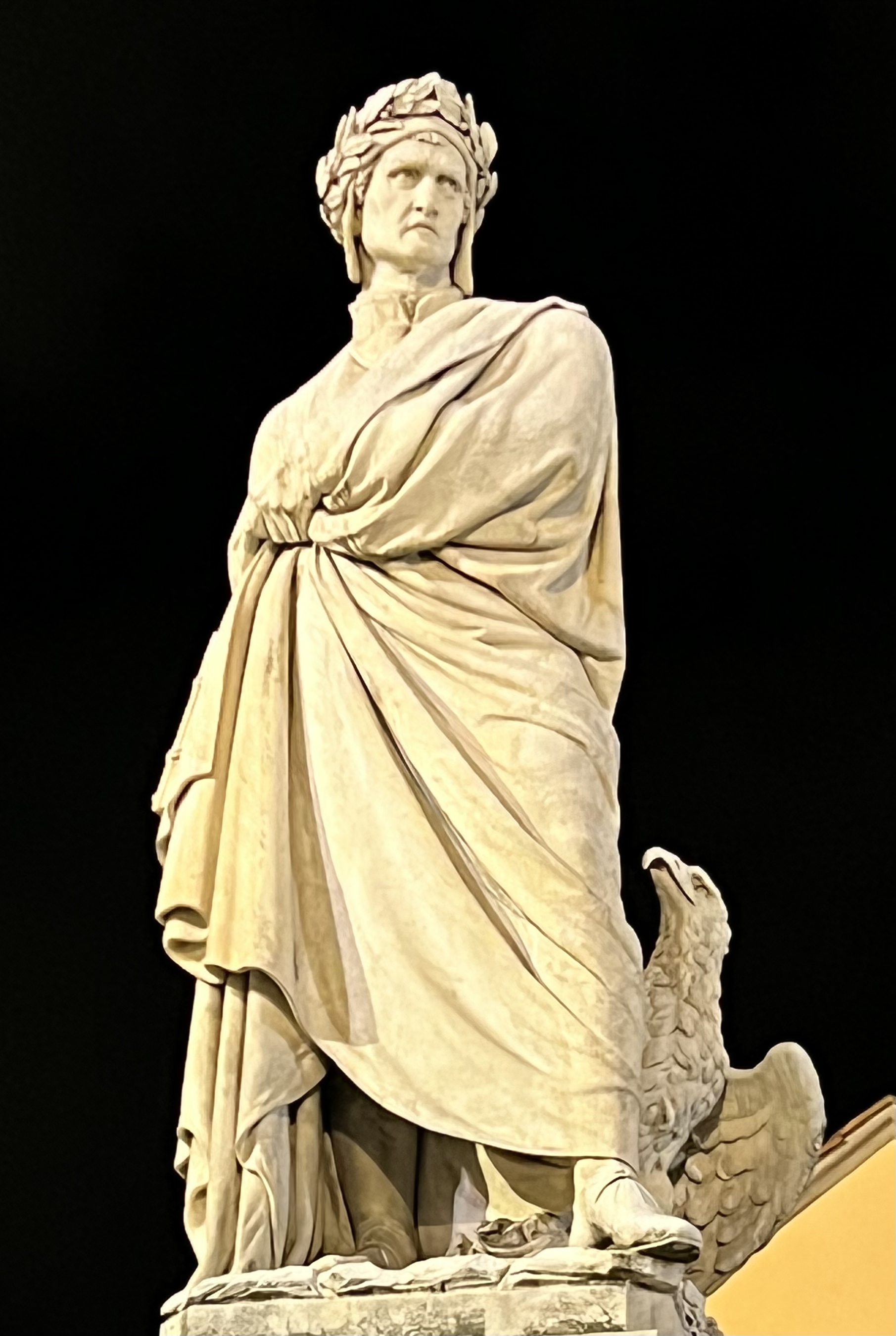 The comedy is not funny. It isn’t jokey at all; Comedy is a literary form contrasted with Tragedy, the former written in colloquial language for entertainment, the latter in a more obscure format for serious consumers.

The Comedy (let’s call it) is divided into three sections over around 14,000 lines that take Dante on a journey, led by the Roman poet Virgil through Purgatory to Hell and onwards to Heaven.

I can’t comment on the work which I have not read, as to whether it is fantastic writing or brilliant creativity although it has stood the test of time.

I gather from reading around, that the story has become particularly famous for two reasons, not necessarily because it was a best-seller when it was published (before Guttenberg (1450’s)) but, because it was a fantastic advertising device for the church, as it describes in endless ways the various tortures, agonies, and embarrassments those who don’t go straight to heaven upon their death experience.

If you commit any one of the seven deadly sins (Pride, Greed, Lust, Envy, Gluttony, Anger & Sloth) – (presumably combo-sins (angry, greedy, gluttonous sloth – I can think of a few of them in the Conservative Party) get you worse punishment) or if you aren’t baptised or up to the moral standards of the church, this is your fate.

It is likely that very few ordinary people read The Comedy when it was written (as most people couldn’t read and those who could would struggle to get a copy), it was two hundred years later when Botticelli after reading the book (or having it read to him, or perhaps the stories related) drew the vision which Dante described did the awfulness of hell become more apparent.

Again, the numbers of people with an opportunity to see the paintings would have been small, no doubt over the centuries, descriptions were passed across the generations, ‘eat your sprouts or you will end up with a backwards facing head’ kind of thing.

All of this was of course great for the church as the only way to get into heaven or avoid being buried alive head-first in boiling pitch was to pray and give the church your cash.

It was an early form of advertising better than anything Saatchi or Apple could have created – a gift that kept giving.

I learned all about of this from Dan Brown after reading the Inferno which is a thriller set in present-day Florence describing Dante’s visions interpreted through the twisted notions of a tech billionaire.

It takes you from the Bobbili Gardens to the Palazzo Vecchio along the Vasari Corridor, all stuff we did or almost did (the corridor isn’t open at present).

We also watched the movie (20% Rotten Tomatoes!) in our hotel (the one overlooking the Arno).

Fittingly the theme of the film (and more accurately the book) is the creation of a novel virus that works to change the world order, to trim-down the human population and create a sustainable world akin to that which existed following the plague of the 1350’s (which in part inspired Dante).

Couldn’t have planned it better.

Although there were no plague doctors wearing long-nosed masks, everyone in Italy had their own masks, all very different from the laissez-faire of England.

We went to the cinema and had to buy an FFP2 mask, which is a level up from that which doctors and nurses wear in hospitals in the UK (and from the mask which I wore when I most likely caught Covid from a patient).

When I first saw people wearing these masks, my assumption was that they looked like the kind you buy in DIY stores (like those people were rushing to buy at the start of the pandemic), imagining my mask, my China-made, Amazon purchase was better. 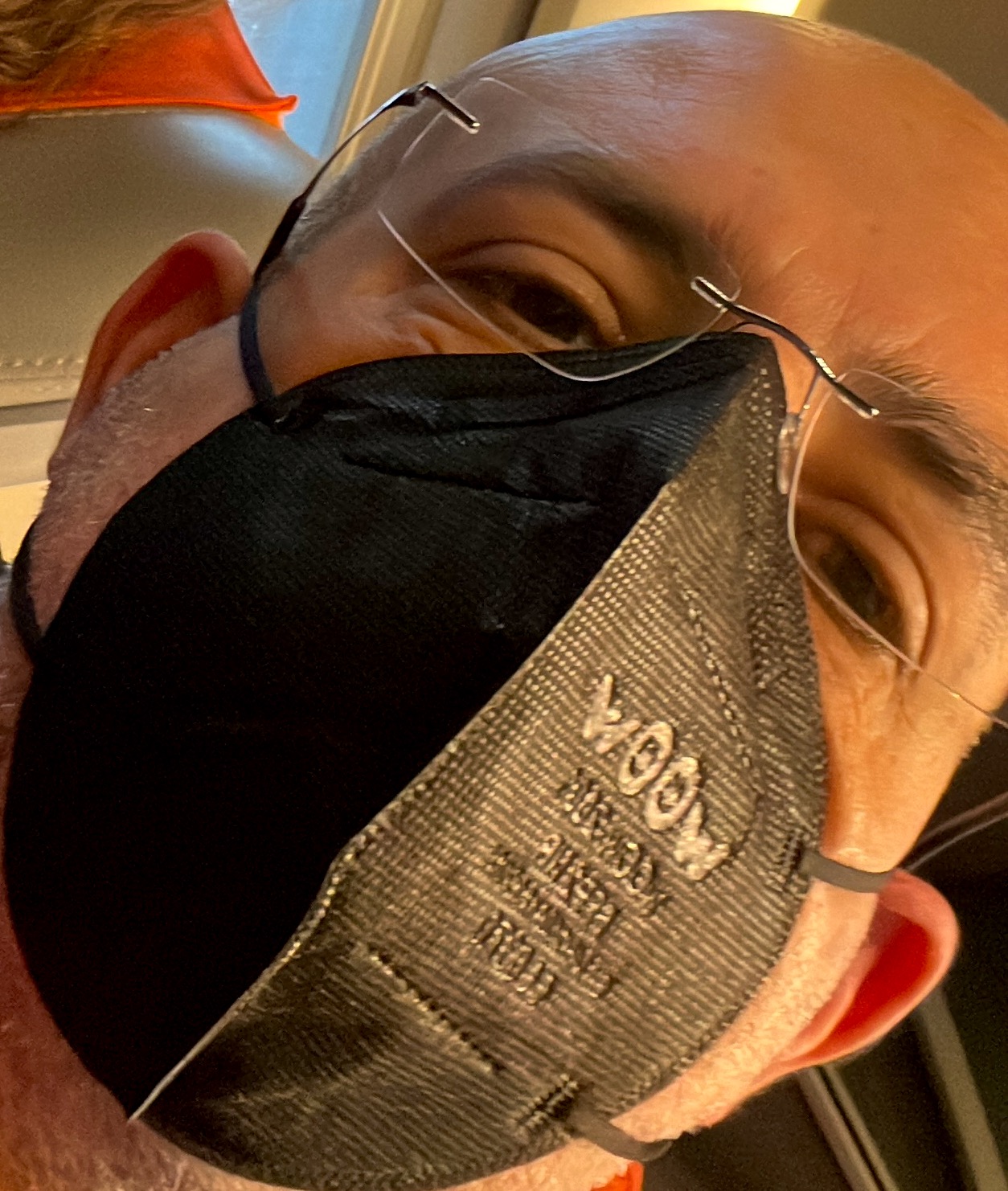 The Italian (let’s call them) masks are much better than the facemasks we wear in the UK. They are more expensive, which is perhaps a reason the government hasn’t proposed them for widespread use, although they are more robust and seem to last longer, they also, because of the way they filter air avoid my glasses becoming misted, which in turn allowed me to check-out the art (fresco, lapis-lazuli, etc)

I don’t know about you, all of this seems very Zen; the narrative is circular, like chicken biting the tail of the snake that is chasing the god that is biting the chicken.

In space and time, we stand still.

The past is very much the present and the future, well, anyone’s guess.

Rest easy, my fellow sufferers, there is more to come. 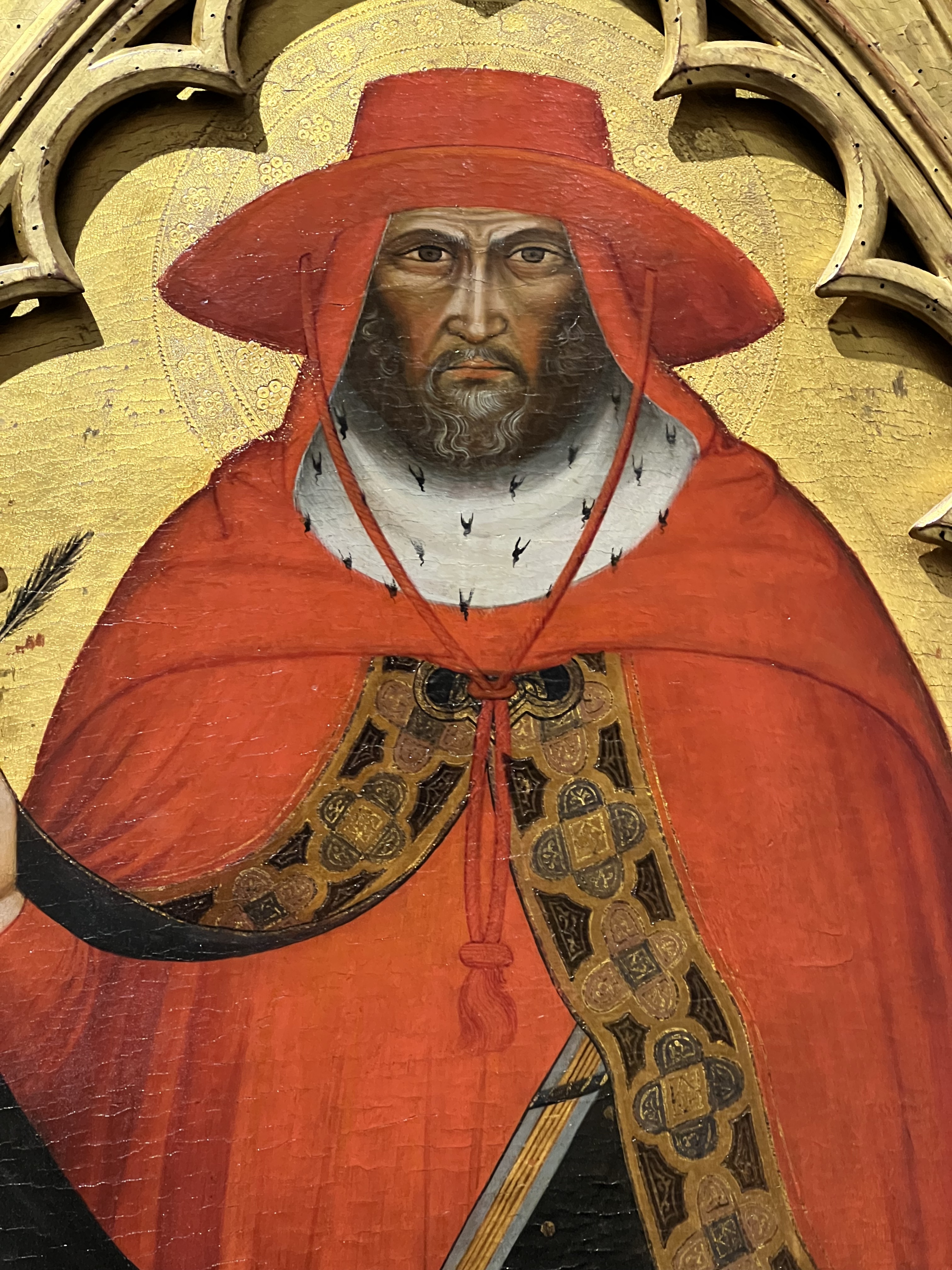