Yesterday when I discussed Orwell and his elephant and Freya the Walrus, I missed the point.

To be honest, I am not sure what I was trying to convey beyond the reality that people, when acting either as individuals influenced by others (by peer-pressure, tradition, or culture, e.g. The Raj, The Russians, the 1%) or groups of people acting as a collective (Svalbard tourists, say), there is a tendency for us to misfire and harm someone or something.

There is more going on.

A couple of weeks ago I read Ruth Ozeki’s ‘My Year of Meats’ – this was one of her first novels (1998) with the two main protagonists, Jane Takagi-Little a Japanese American documentary producer/director and Akiko a Japanese housewife. The former is running a TV docuseries ‘My American Wife’ sponsored by BEEF-EX (The US meat-marketing board), conveying the message to those in Japan that meat is good (and beef is best) and Akiko, who is wife of Joichi ‘John’ Ueno (Like John Wayne, he jokes) responsible for commissioning the series and beholden to his meat bosses. 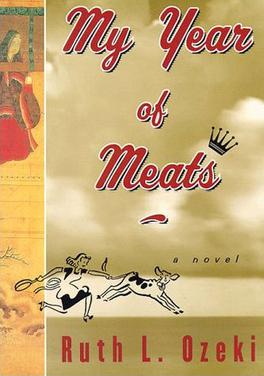 Like every other book of Ozeki’s it is amazing, and I recommend.

I’d like however to take us back to Orwell’s elephant, let’s call him Ganesh as that seems apposite.

In the narrative (Have read the essay? (Link here again))* Orwell considers the onlookers’ desire for a spectacle with the ultimate outcome of them managing to get their hands on elephant meat to feed their families.

As far as I know Freya hasn’t been eaten. The official story is that her body was taken away for necropsy, to determine why she might have demonstrated her unusual south-swimming behaviour (I suspect an animal psychologist could have done just as good a job with the living creature).

Part of the Norwegian justification or perhaps rationalisation for killing Freya was that people should use their energy protecting the species rather than over-romanticising Freya who was after all, just a walrus.

It is easier to conceive of the Burmese villagers accepting Orwell’s actions as they got some food, the actions of the Norwegian tourist were at best a holiday story, at worst a blurred selfie.

I don’t know for sure although I suspect Ozeki is vegetarian. She might vegan.

My Year of Meats explores the agri-business in America, with all its awfulness.

Last night I read on Quora the answer to, ‘How safe is chlorine washed chicken?’ (A practice in America because the poor fowl live in such unsanitary conditions, without this, they would arrive at the shops swarming with fleas, bacteria, and other pests) (Ignore all the antibiotics and steroids saturated in the meat itself).

This morning I discovered that there are over 1,000 mega farms in the UK.

In the UK there is one ‘farm’ that manages/houses/grows/processes? Over 1.4 million chickens. (Can you imagine?)

I am not a vegetarian or vegan (I had some chicken the other day, although that was mostly because it was going-out of date and would have otherwise spoiled which I perceive as a greater waste than not eating the meat at all).

When I was younger, I couldn’t get enough of chicken, a hangover from my mum’s chicken soup and roast chicken.

I am not trying to demonstrate my foodie credentials, more reflect that I have reduced my meat/poultry/fish consumption because it is bad for the environment, it is bad for me and it is bad for the fish, cow or chicken that would otherwise have been my dinner or the milk in my coffee or cheese in my sandwich.

No one is right.

Perhaps Freya was right although that turned-out very wrong.

Remember the biblical saying that they who are without blame should cast the first stone, well, this is an example.

A mega-farm (can you spot Daisy?)

*Just discovered my daughter read this in year 9 at school. Perhaps it is more popular than I had thought.