One of the most amazing aspects of working in community health has been how I have encountered patients and their relatives.

Now, I have been working with people for a long time – over 20 years and most of my experience as a doctor has been treating, supporting and caring in a hospital context. That is, within the walls of a super-organisation; I was going to write, super-organism and, that is probably also the case.

Once you take people and force them to work together, to collaborate within the confines of concrete and glass their behaviour changes and so too does that of the people they treat.

I think I have established over many blogs that hospitals are frequently perceived as places of threat. Whether you are a young child, middle-aged man or in the last days of life, it is, by and large, frightening.

Sure, the staff are kind (although I appreciate not all necessarily come across that way at all times) and the whole purpose of the place is to heal, cure or treat; yet, frequently this isn’t the perception.

People coming and going; a major difference being that the destinations and arrivals are often opaque in hospital, the duration and number of stop-offs frequently not revealed until it is too late.

When I go to Heathrow, I have an app that tells me where to go, what to do and how; I am sure that some hospitals in the UK have an app already that tells you about your visit, your appointment and so on, yet, given the financial situation of the NHS, only tiny amounts are ever invested in communications or graphic design – despite the NHS having loads of money, things don’t always flow where they should. 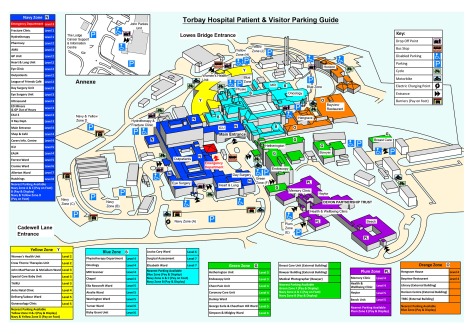 In the past 10 years hospitals, in my opinion, have become more frightening – even the issue of car-parking, ever the bane of a Chief Executive’s existence has become a major impediment. If you are in Central London (where the decisions are made), you are OK, the further away from the centre, the more rural your place of residence, the harder. And often the more expensive.

Whether or not you have the stress of parking (I won’t even mention the stress of waiting to be picked-up by hospital transport – early rise, waiting for the door-bell, getting your stuff), navigation is mostly tricky.

There is a whole science of finding your way, the simplest being sign-posts and arrows, ideally alphabetised. I haven’t encountered a hospital yet where this is sorted.

You worry about arriving early for your appointment, know you will wait, or you might be lying in an ambulance outside A&E for three hours or a stretcher in the hospital waiting for a bed and all of this going-on when you are either worried, ‘Do I have cancer?’ or unwell – sepsis, infarction, inflammation.

Observing from the outside it might appear as a macabre game of survival of the fittest.

All of this leads to an effect on people.

It increases their level of stress.

Fascinatingly, the staff who work in the hospital, although stressed because of other things – shortages of staff, bullying managers, don’t perceive the environmental or situational stress of the appointment; they know where to park and the location of the toilets.

Encountering a patient, carer or relative in hospital is a situation where there is a power imbalance – me doctor, you patient, either with the professional hierarchy or one based on knowledge alone – I know what is wrong, or I think I do, you are lost.

This imbalance worsens the stress, combining it with fear and the lizard-brain kicks in, often shutting people-down, creating either submissiveness, passivity or aggression.

You see, the wonder of the community is that this is mostly absent.

Sure, a visit to the GP or to see me at the surgery might be stressful – getting time off work, or someone to look after the children, for example, yet, the location is usually familiar, so too the people, the staff.

When I visit someone at home, and they are sitting in their favourite armchair, the lighting just right and if I am lucky, dog by their side, the encounter is different. The fear is absent, or if present, quickly ebbs.

I am relaxed, as is my patient and their son or daughter. I am the outsider here, coming-in as a guest through the unlocked door into a world which is familiar to them.

There is a misconception within healthcare (you’ll note I haven’t said health and social care, as I believe this is mainly a clinical thing), that the sick people are in hospital.

Yes, this is the case.

If you go to intensive care or high dependency you will meet some very unwell individuals; those on ventilators, inotropes supporting their blood pressure, wires and cannulae into every opening.

Yet, the numbers are usually small.

An average hospital might have 20* or so such beds; the rest of the patients have varying degrees of illness, with a huge number in hospital beds because there is no other place for them (community inadequately funded often to attend to their needs).

At the same time, out in the community there are perhaps five or ten times as many people (aka patients) who are equally and often more unwell, being treated, supported and looked after in care homes and their own homes. Their numbers are hidden as NHS priorities find this hard to represent; the front-page image of ambulances queuing outside A&E is not easy to translate into a front living room converted to a treatment area with round the clock support provided by community teams and families.

This week in Cornwall, the main hospital in Truro called a ‘black alert.‘

Another way of putting this is that the care that exists in the community – including the work of GPs, community nurses, therapists and pharmacists hugely dwarfs the amount happening in hospital, yet the budget is just as disproportionately weighted;

I read recently that the budgets of the eight big hospitals in London are equivalent to all the money spent on community care in England and Wales.

I might be getting away from the point, but, I think essentially my message is that hospitals serve a purpose, but that has all become misaligned in recent years and convoluted by people doing what they have done, maintaining traditional ways and working practices.

This blog was going to start with my mentioning the spiral. To those of you who have been reading, the fact that I have only mentioned this now is probably a relief (although not as good had I left it out altogether), yet, the next stage to discuss was going to be blue; this is hierarchy, organised religion, systems and processes – military or regimental order.

Some people think the hospital can function in this way; ensuring that every box is ticked, and all numbers are rounded up to the nearest decimal point. There is no room for fuzziness, which might be translated into person-centredness, for people if they are anything, they are sometimes a bit untidy, a bit of a mess.

I will explain more in a later blog.

For now, I’d like to reflect on the stunningly, overwhelmingly positive experiences I have had since working in the community. The laughter is often infectious, the smiles, the warmth, the thanks. Mutual respect, kindness and caring. Fascinating insights into the lives of people who have lived for 90 years and more, moments of grace where mother and daughter hold hands, or old dog’s tail wags at his owner’s voice.

Will it ever be possible to improve the hospital situation – to make it more like home and less like a thing?

It is hard to imagine, so long as the staff in hospitals are treated themselves like pawns in a game of command and control.

It is the aspiration to make the hospitals look clinical that makes them alien;

When a surgeon is poised over my broken hip I would like that clinical sterility, that void of softness; yet, for that surgeon to function in a team, with people, peers, they need the kindness, caring and empathy of the group, the ability to be told-off for a silly mistake or mis-perception; ego can’t be allowed in.

Maybe it is an ego thing.

Perhaps, and, also something related to experience.

Most doctors and nurses working in hospitals have minimal exposure work outside the confines of the walls of the institution. Have never been to a patient’s house, have never sat in general practice and listened to the interactions or observed the variety of experience that is routine for a GP or practice nurse.

There is an aspiration for more medical and nursing students to spend time in the community, to learn the lessons of person-first, yet, our society still sees the hospital as the place to go, it is still caught in a 1950’s romance with what the NHS was meant to be.

The NHS is, and it is very great, amazing, it just seems a little uneven at times.

I wish that every doctor, nurse and clinical worker could experience the enriching experience of asking a patient, ‘What matters to you?’ And, having this followed-up with an action plan that is not based on their perception of what I think should matter – again, that fear divide is diminished in an untidy bedroom;

Perhaps with the current plans to divert money into community services we will see this change; equally, the nightmare might happen, and we will turn the community into a hospital without walls, with all the bad aspects and none of the organisation.

We don’t want that.

It seems so easy, so straightforward, for people to respect one another and listen; pay heed, attend with sensitivity, openness and honesty. There is no place for fear in growth – that just stultifies and entrenches.

One thought on “Humanity differing.”